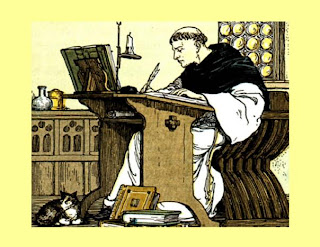 Author bias. Is it possible to write historical fiction without it? Does objectivity fly out the window when an author presents a character's point of view?

Hmm, uhhh... yeah. If the author didn't pick whose side to be on in the story, how would she ever get the reader to cheer for the dashing hero or feisty heroine and boo at the villain?

But what about non-fiction authors? Are historians biased? How could they be if history is supposed to be about the facts? This is a problem historical fiction writers are frequently faced with when researching their subjects. Even when delving into primary sources, bias can be present and secondary sources often perpetuate these. The truth is not always easy to sort out.

Researching the murder of John 'the Red' Comyn at Greyfriar's Kirk in Dumfries in 1306 brings about a key question: Who exactly killed him? Robert the Bruce - or someone else? The chronicles of the Englishman Walter of Guiseborough claim the Bruce lured Comyn to the church with muderous intentions; the writings of John Fordoun, a Scotsman of the time, stresses Comyn's betrayal of the Bruce. If you read a translation of the well-known Lanercrost Chronicle, a recording of happenings at the the time by holy men in an abbey just south of the Scottish border, then Bruce 'seditiously' lured Comyn to the church and 'did slay him'. Ronald McNair Scott's 'Robert the Bruce, King of Scots', refers to 'oral tradition' and a 19th century chronicle called Liber Pluscardiensis. Scott writes that Bruce confronted Comyn about his treachery, they quarreled, Bruce struck the first blow and then one of his companions, Roger Kirkpatrick, killed Comyn.

When examining an event that occured centuries ago, the facts are often muted, muddled and scattered. The English version of Comyn's death is obviously going to have a different slant to it than the Scottish one. It just goes to show you there are two sides to every story. 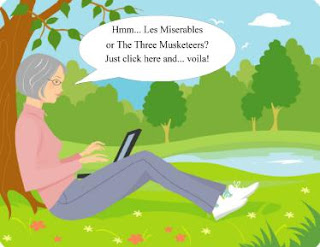 While I will always prefer real paper books pressed between my fingers, I don't really mind reading on my computer screen. In fact, having been in a critique group for a couple of years and swapping manuscripts electronically with fellow writers, I've gotten rather used to it. When traveling, I almost always take my laptop and sometimes there just isn't room in my carry-on luggage to cram another book.

I've held off on buying a Kindle because if I have to choose between a $299 device that only downloads books (when I know a year or two from now it will probably be outdated) and new carpet for the bedroom (although I'm very fond of the coffee stains, dog puke spots and indescribably colored traffic pattern), well, I'm gonna buy the carpet. First we have to drywall the garage, though.

But hold on! Amazon.com recently announced it is going to release FREE Kindle software for PCs! The e-reader companies are at war. Hey, works for me. I can support new authors, buy 3 downloads for the price of one hardback, AND save trees all at the same time. (Yes, I'm a tiny bit excited about this.)

Awhile back I blogged about the Espresso Book Machine. The publishing world seems to have been one of the last to be affected by technology, but the 'current economic situation' is applying new pressures to the system. It's hard telling what will stick and while things may seem tough in publishing right now, what is likely to emerge is something more efficient, greener, and with a myriad of options. In fact, it's already started.

Until later,
Gemi
Posted by N. Gemini Sasson at 5:09 PM No comments: 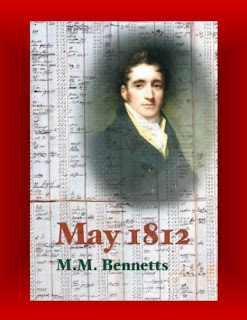 Fanfare, please. Some wonderful news from fellow writers over at Authonomy! In the year I've been on the site, I've had the pleasure of getting to know some talented, emerging authors, a few of whom are now breaking into the world of publishing.

First up is the wonderful May 1812, by M.M. Bennetts, due for release on November 14th, 2009. In the time of Napoleon, the Earl of Myddelton must break the French code to spare men from dying in battle. When the Prime Minister is assassinated in May, 1812, Myddelton is immersed in an ever-increasing crisis, even as his personal life crumbles around him. For more information, check the press release or visit the publisher's website at diiarts.com. Trust me, when you read Bennetts' stories, you will believe they were actually written by someone who lived in early 19th century Europe and experienced it all.

Next is this gobsmacking piece of news from the publisher Gollancz: Elspeth Cooper was signed for a three-book deal, with the first story in The Wild Hunt Trilogy, entitled Songs of the Earth, due out in early 2011. Associate publisher Jo Fletcher described Cooper's work as "an unputdownable fast-paced adventure with characters who leap off the page". Having read an early draft, I concur completely. Cooper's writing is brilliant - in descriptive prose, characterization and pacing. It reminded me why I fell so in love with the fantasy genre in my teens. Cooper's name will be added to my now resurrected list of favorite fantasy authors, like Brooks, LeGuin and yes, even Tolkien.

In a time when new writers often despair of ever getting into print because publishers are paring down on their lists, this is evidence to the contrary. Talent will find a home. And the world will have new writers to read.

I have the feeling there will be more good news to come.

P.S. Yes, I know I promised a post on author bias and it is coming. Honest! I've just been busy writing, really!!! I figured while I had momentum I'd better run with it.

How much is too much? 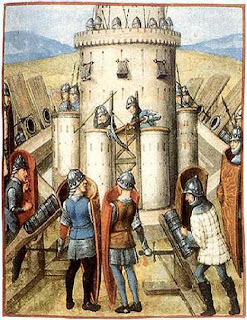 Last week in a fit of retail therapy, I ordered research books online. They sneakily arrived while I was out of town (judging at the Australian Shepherd Club of America National Specialty, which was one of my lifetime goals - yay!). This morning I decided to organize my desk before jumping back into the writing. Good intentions and all, but alas I made the mistake of opening up the packages. I should have ruthlessly shoved them aside for weekend reading. Shoulda, woulda, coulda. Did not.

A wrinkle in time then occured. 'Tis true. A black hole opened up beneath my chair on rollers and somehow I lost an hour of writing time. One moment it was 11:02 a.m. and the next thing I know, I glanced at my watch again and it was after noon.

One book follows the life of Robert the Bruce, and another about Edward II is still en route. Neither of these were available when the seeds of my stories were but moldy little sprouts in the lightless recesses of my brain. I'm hoping they'll help flesh out some weak points in the plot, but also afraid I'll end up adding another 30,000 words to bring realism to the story, then deleting the same amount later so as not to overwhelm the reader . It's a vicious cycle in the chaotic process that is writing, but it happens.

Next, I opened The Medieval Fortress, by Kaufmann and Kaufmann. I forgot I had laundry to fold, a story to finish and even, I'm pretty sure, my own name for awhile. Page after page of detailed sketches of castle gates, timber hoardings, and arrow loops (who knew there were so many different kinds?). Oh the glory and wonder of research! I read, I see PICTURES, and I am THERE!!!

Then I realized the danger that lurks for writers of historical fiction. Detail brings reality and credibility to stories, but it can also overrun them. Like dark chocolate and Toasted Almond coffee, both of which I love, research for me is best done in moderation - otherwise, I'd never get on with writing. So maybe the question is not 'how much is too much', but 'how much is enough'?