The Big Cover Reveal for The King Must Die 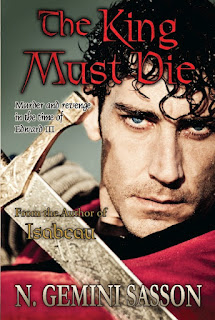 What is done cannot be undone.

England, 1326. Edward II has been dethroned. Queen Isabella and her lover, Sir Roger Mortimer, are at the pinnacle of their power.

Fated to rule, Isabella’s son becomes King Edward III at the callow age of fourteen. Young Edward, however, must bide his time as the loyal son until he can break the shackles of his minority and dissolve the regency council which dictates his every action.

When the former king is found mysteriously dead in his cell, the truth becomes obscured and Isabella can no longer trust her own memory . . . or confide in those closest to her. Meanwhile, she struggles to keep her beloved Mortimer at her side and gain yet another crown—France’s—for the son who no longer trusts her.

Amidst a maelstrom of shifting loyalties, accusations of murder propel England to the brink of civil war.

In the sequel to Isabeau, secrecy and treason, conspiracy and revenge once again overtake England. The future rests in the hands of a mother and son whose bonds have reached a breaking point.

*****
The release of The King Must Die is coming soon! The paperback should be available in early April, followed shortly afterward by the Kindle book. I'll post here when and where the various formats can be purchased - or if you're a regular user of Facebook, sign up for my fan page (it still seems weird to me to say that). Don't worry - I keep my postings to about one per week, so I won't flood your newsfeed. You can also drop me a line via e-mail at imgnr "at" imgnr "dot" com and I'll add you to my e-mail list for new releases.

Some folks have wondered why I ended Isabeau where I did and why I didn't tell "the rest of the story" (not giving out any spoiler here, so forgive me for not elaborating further). Initially, I intended to write a single book, but there was just so much to tell about Isabella and Mortimer I knew I couldn't do it justice without writing an 800 page book. I don't know about the rest of you, but I find doorstoppers like that a bit daunting. Isabeau begins in 1308 with her wedding to Edward II, yet she lived until 1358. Covering that many years while moving the story forward and keeping it all connected was a challenge. So as I considered events, I decided there were two distinct periods in Isabella's life worthy of telling - and thus, two books.

For anyone who thinks I research and write fast enough to put out fresh new books every six months . . . uh, sorry, but I actually write much more slowly than that. I started writing over 12 years ago, while my kids were at school, and even while I was querying agents and then my lovely agent was circulating my manuscripts to editors, I kept writing. During the past two years, I've been mostly re-writing, adding a few new chapters here and there, learning about digital publishing and gleaning wisdom from the generous indie author community.

While I enjoyed my writing time, those 12 years were sometimes also lonely and frustrating years. There was a time when I thought The King Must Die would never be finished, let alone become a real book. It sat on my hard drive 2/3 complete for close to three years. I sincerely want to thank all the kind readers who have made the long struggle worthwhile. You are the reason I continue to park myself before the keyboard everyday. I hope that you learn a little bit along the way while getting lost in the world of people and events from the past.

Until later,
Gemi
Posted by N. Gemini Sasson at 9:24 AM 9 comments:

The featured book this month at Historical Fiction e-Books is The Honor Due a King. Check here for my blog post 'What was Robert the Bruce really like?'

P.S. Big cover reveal for the sequel to Isabeau, The King Must Die (scheduled for release in April 2012) coming soon!

Email ThisBlogThis!Share to TwitterShare to FacebookShare to Pinterest
Labels: Robert the Bruce, The Bruce Trilogy, The Honor Due a King

Over at Writer Unboxed...

Last week I was honored to appear over at the fabulous writer's blog Writer Unboxed, courtesy of the gracious Anna Elliott, along with fellow indie authors Sarah Woodbury and Jennifer Becton. The topic was Advice for Indie Authors. As you can see, there are a variety of approaches to getting started and finding ways to get the word out about your books.

Speaking of which, I must finish my latest so I can get started on the next one...

Until later,
Gemi
Posted by N. Gemini Sasson at 9:03 AM No comments: