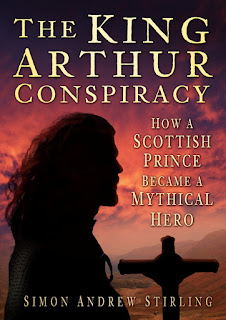 The greatest benefit of the years I spent on the writing site Authonomy were the talented writers I met during that time. One of those is Simon Andrew Stirling and I'm proud to introduce him here, along with his books, The King Arthur Conspiracy, How a Scottish Prince Became a Mythical Hero and Who Killed William Shakespeare? The Murderer, The Motive, The Means.

Simon writes non-fiction and does it in a narrative style that brings to mind those dramatic voice-overs for movie trailers that grab your attention. He's also not afraid to tackle some of the great questions of history and levy what are not only strong arguments, but which sometimes break with tradition and make very bold statements. Rest assured, his are very scholarly works, backed up by solid resources.

Simon was generous enough to stop by and do a little Q & A for me. As you can see, he really has devoted his life to these subjects:
***** 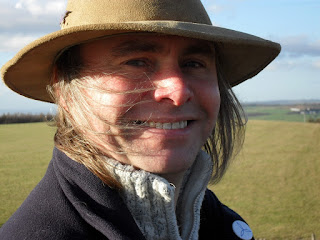 1) What is the title and genre of your current work and what's it about?

"Who Killed William Shakespeare? The Murderer, The Motive, The Means".  As with my previous publication, "The King Arthur Conspiracy", it was my publisher who came up with this title. All I did was alter three indefinite articles to three definite ones.  Genre-wise, it's historical non-fiction, with some literary criticism and a fair bit of investigative research thrown in.

At one stage I was contemplating a trilogy based on the life of William Shakespeare.  A major turning point in his life seems to have been the events surrounding the notorious Gunpowder Plot - allegedly, an attempt by Catholic militants to blow up the King and his Parliament in 1605 - and this would have formed one third of the trilogy.  Another part would have been taken up with the end of his career, his retirement from the stage, and the strange circumstances surrounding his death.  Finally, to complete the circle, as it were, I'd planned to cover Shakespeare's early life, which would put the rest into context.

In the end, though, I chose to focus on the end of Shakespeare's days but to incorporate much of the remaining material into the book.  Thus, we start with a few chapters analysing his death.  Then we go through his life - and the terrifying events which were being played out in England, and the rest of Europe, at the time - until, in the final chapters, we catch up with his death again.  The last chapter looks at the life of his illegitimate son, who did much to keep the memory of Will Shakespeare alive through difficult times.

2) Where did you get the idea for it?

I grew up near Shakespeare's Stratford.  In fact, I knew Stratford-upon-Avon pretty well long before I knew much about William Shakespeare.  At an early age I got interested in acting, and at school I began to lean towards English Literature.  I studied Eng Lit, Drama and Gaelic Studies at university (briefly) and then went to drama school in London.  Little by little, Shakespeare became quite a big part of my life.  When I became a professional dramatist and scriptwriter, it struck me that it would be useful to know what made Shakespeare tick.  What was it about him that allowed him to become the greatest writer in the English language?  I was particularly intrigued by the character of Lady Macbeth - where did she come from?  So I started to research his life.

One thing that really helped was moving back to Shakespeare country.  Towards the end of the 1990s, I left the city and set up home in rural Worcestershire, where I met my wife Kim (who was born in Stratford).  A little later, my brother opened a shop in Stratford town centre, so I was spending more time there.  Also - and this is a big advantage - I knew a great deal about the area around Stratford.  Most Shakespeare biographers pop up from London, look around Stratford, and then go back.  I've spent most of my life in the areas which Shakespeare knew, and so I'm more aware of the local traditions which most commentators either ignore altogether or don't really understand.

3) How long did it take you to write it, from picking up your first research book to the final product?

Twenty-five years.  On and off, obviously.  But I know that I was 20 or so when I thought, "Wouldn't it be interesting to know what was going on in Shakespeare's life when he wrote "Macbeth", and to figure out where the character of Lady Macbeth came from - was it mid-life crisis? an unhappy love affair?"  That meant researching Shakespeare's life up until the age of 41 or 42, and researching the Gunpowder Plot alongside that.  That took about ten years, after which I began to look a bit more closely at the end of his life, and then his early years, and here I am, about to turn 46 and soon to publish the results of my quest.

4) Were there any special challenges with tackling a complex topic like this?  How does it differ from other books on Shakespeare?

One huge challenge (which complicated the first twenty years of research) was this: I found reading - and watching - Shakespeare's work utterly unenjoyable.  Hardly any of it made sense.  Reading or going to see a Shakespeare play, even at the Royal Shakespeare Theatre in Stratford, felt a bit like going to the dentist: unpleasant, and actually quite painful, but good for you in the long run.  It annoyed me intensely, though: here was the best writer, the national poet and an ongoing obsession of mine, and picking my way through his work was like trying to read a foreign language.

Actually, it wasn't quite like that.  I understood the words Shakespeare was using - I just couldn't figure out what he meant when he strung those words together.  The breakthrough came in the mid-2000s, when I started to ask myself: "Could Shakespeare have been Catholic?"  Looking back, it's amazing that I hadn't asked that question before - after all, Shakespeare was closely connected to the gunpowder plotters (who were Catholic), and his main patron grew up a Catholic, and his father had signed a Catholic will, and there are Catholic characters in many of Shakespeare's plays.  The problem, though, is that Catholicism was outlawed in Shakespeare's England.  Catholics were made to suffer horribly - even though, up until the time when Shakespeare's father was a boy, everybody in the country had been Catholic.

Researching Catholicism in Shakespeare's England, and the appalling suffering of the Catholics, proved to be the key.  Suddenly, plays which had meant nothing before became enormously meaningful.  They also became angry, painful, horrifying.  Most of all, though, I could read them for pleasure.  The old problem of not being able to understand and enjoy Shakespeare had gone.

But that's not all.  My access to the local traditions concerning Shakespeare had alerted me to a story, told by a Victorian clergyman, regarding Shakespeare's skull.  It's not where you might think it is.  I tracked down a journalist who had photographed the skull.  By painstakingly comparing the skull with various images of Shakespeare - including the most famous portraits, and a death mask, now in Germany, which many English Shakespeare experts refuse even to talk about - I realised that this was Shakespeare's skull.  The injuries inflicted are visible, not just on the skull but on the portraiture too.  Those injuries tell us how Shakespeare died.

So what makes this book different?  Well, it jettisons the old-fashioned nonsense (still pretty widespread) that Shakespeare was a humble, conforming, petit bourgeois Protestant - a man so self-effacing that he could die without anybody noticing - and puts his work squarely in the context of his times.  It draws on local traditions, unknown to or ignored by most of his biographers, and follows them up to reveal some startling facts about his life.  And it demonstrates, forensically, how he died, as well as explaining (to the best of my ability) why he was "stopped".

5) What other books do you have available and what are you working on next?

"The King Arthur Conspiracy: How a Scottish Prince became a Mythical Hero" was published last summer by The History Press.  That was my first major venture into publishing, and it took me about eight years to get from stumbling across a historical reference to the genuine Arthur to seeing my book in print.  I'm now following up on that research.  Late last year I put together an academic paper which focused on Arthur's last battle (in Scotland) and uncovered some new trails.  Moon Books have now offered me the chance to publish a chapter a month, online, of my work-in-progress, which I'm calling "The Grail: Relic of an Ancient Religion".  The first chapter should be up on the Moon Books website in a few weeks, and hopefully we'll keep publishing a monthly chapter online until the book is complete.  This will take about twelve months, and then the whole thing will be published in paperback by Moon Books.  This is a new way of working for me, and I'm already finding it a fascinating challenge.  Fortunately, I've got an artist who lives in the same village as me who's keen to create a unique image to go with each of the chapters, and there's a post-graduate student in New Mexico with whom I've been working on projects relating to the Grail legends for more than a year now, and he's great and providing useful and thought-provoking feedback.  So, all in all, I'm hopeful that "The Grail" will be a fine addition to my ongoing work on the origins of the legendary Arthur and the early history of Britain.  Better still, anyone who wants to will be able to follow the progress of the book, one chapter at a time, just by going to the Moon Books website (http://www.moon-books.net).  How about that?
*****

Thanks for stopping by, Simon!

"The King Arthur Conspiracy" on Amazon.com

Happy Reading,
Gemi
Posted by N. Gemini Sasson at 4:00 AM No comments: