Goodreads Giveaway and Blog Tour for The King Must Die

The King Must Die

Giveaway ends May 08, 2012.
See the giveaway details at Goodreads.
Enter to win
Want to win a signed paperback copy of The King Must Die? Enter at Goodreads by clicking on the link above! 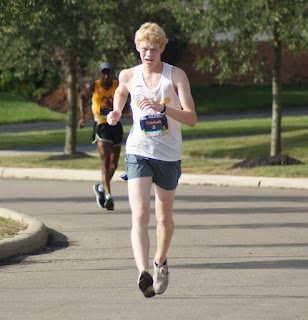 For over a year, I've been hoping I would one day be able to write this post... and now I can. I want to share this story to give others hope, in particular those who suffer daily with a chronic health condition, even though they may look entirely normal on the outside to others.

Most of us have times in our lives when nothing is going our way. Try as valiantly as we might, forces beyond our control sabotage our most determined and sustained efforts. If we're fortunate, we can identify the roadblocks, remove or work around them and fly toward our dreams. As I've been known to tell my kids, nothing truly worth doing is easy. What doesn't kill you makes you stronger, right?

But last year, I struggled to repeat those sayings, because every day I saw that no matter how badly my son Mitchell wanted to succeed in his chosen sport and no matter how hard he worked at it, his body just wasn't going to let him. In fact, even day to day activities were becoming increasingly challenging for him. Sometimes you begin to question if it's time to set aside the big dreams and just deal with the little obstacles and reclaim ordinary. He was there. 'Giving up' seldom seems admirable, but when reality keeps smacking you down, you figure maybe The Universe is trying to tell you to do something else.

When he should have improved steadily throughout each cross country and track season, instead he would backslide when it came to the post-season. His times were often erratic and unpredictable, which we chalked up to his exercise-induced asthma (EIA). He tried every inhaler known to medicine. We eventually found a couple that were mildly helpful, but none that reliably eradicated his symptoms. Sadly, the medication we found most effective for Mitch, Intal (cromolyn sodium), is no longer sold in the U.S. because the propellant used in it contains ozone-depleting substances. While I'm all for saving our environment, rah-rah, I can't tell you how exasperating this news was as a parent, especially considering the fact that such medications account for only a fraction of one per cent of the CFCs released into the atmosphere. The FDA seemed to think there were acceptable and equally effective alternatives. My son will tell you there is not.

Mitchell has loved distance running since his middle school days, and while he was a solid contributor to his high school team, excelling as an individual was always out of reach. Racewalking allowed him to fine tune his technique and become a contender, despite his physical limitations. For those who are not familiar with racewalking, it is a full-fledged Olympic event in which competitors must have one foot in contact with the ground at all times, unlike running, in which the runner loses ground contact for brief periods during the stride phase. Here's a video of phenom Trevor Barron, in case you want to see America's best at it.

Last year, during his senior year in high school, Mitchell came down with a respiratory infection. For two weeks, he nearly expelled his lungs. After a round of antibiotics, he quickly became ill again. It seemed he was sick from January through May. And not just sick, but exhausted to the point where he'd come home from school, crash with a 4-hour nap, wake up long enough to do homework, then sleep another 10 hours. Extreme daily headaches added to his problems. He no longer had the energy to do the things he loved most. The fatigue, headaches and recurring illness got so bad, that he eventually had to quit his senior track season. The kid who used to talk to people about going to the Olympics one day, who had earned an athletic scholarship for his racewaking, and who used to plaster Post-It notes with his goal times all over his walls and ceilings, no longer seemed to care. Why even try anymore?

Add to the asthma the fact that he constantly had problems with iron depletion, or borderline anemia, despite that we were pumping iron supplements into him and feeding him red meat as much as possible.We took him to several doctors and drew enough blood to give an elephant a complete transfusion. One doctor actually told us it was 'normal' for teenagers to sleep 12-14 hours a day. Every day? Naw, I don't think so.

Being the trooper Mitchell is and not wanting to burden others, he kept his problems to himself. I'm sure most of his friends, teachers and coaches never knew how terrible he felt. Anyone who's a parent knows you want to see your kid succeed, but more than that, you just want them to be healthy and happy. He was neither, anymore. I tried very hard to keep things positive with him, saying we can always find a lesson and a purpose in everything that happens to us, even the bad stuff. At times, that got really hard to do. I told him maybe this was to help make him grateful for the small things in life and if we figured this out and could overcome it, it would only motivate him that much more.

I was relentless and determined to figure out why he was not getting any better. The answer came with a simple post on Facebook. I mentioned how often my son had been sick and what his general symptoms were. My sister-in-law told me about her own bout with bronchitis and about learning that it was due to dust mite allergies. The light bulb went on.

So we hauled him to an allergist to get poked with dozens more needles. Lo and behold, not only was he allergic to dust mites and pollen, but wheat and soy. Food, like bread, cookies and spaghetti, for Pete's sake! Not only was he inhaling his allergens, he was ingesting them, too. Unknown to us, those weekly pasta dinners that are customary among cross country teams had been slowly poisoning him each season. The reason his body couldn't get enough iron, was because he wasn't even absorbing it to begin with. It bears mentioning that while he does not, to our knowledge, have Celiac disease, which is an intolerance of the digestive tract to the gluten protein found in wheat and other grains, his symptoms are very similar.

We have collected a few stories from walking into eating establishments and asking for an allergen menu. At one place, when we explained he couldn't have wheat, the hostess said he could have white bread instead. Um, hello? Bread is made from flour, which is made from ... wheat.

It took nearly six months for Mitchell to begin feeling 'normal' again. During his first indoor track season as a freshman competing for Goshen College, he busted his old Personal Record at the NAIA National Meet in March by going 14:16 in the 3 K race and placing 6th for All-American honors. Lately, he's started feeling so great that he keeps pushing himself at practice (thanks in part to his supportive teammate and school record holder Jake GunderKline) - so much so that during his first 5 K race last week, he clipped a minute and 35 seconds off his former PR and made the automatic qualifying standard for NAIA Outdoor Nationals.

It's been a long journey, but we've learned a lot along the way. Most importantly, we learned you have to educate yourself about your own health - and never give up hope that things will get better. Because they can and often do.

The King Must Die - Now available on Kindle!... and where to find more great Historical Fiction 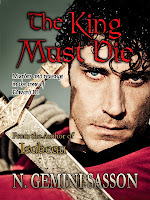 Just a quick note to let everyone know that The King Must Die (the sequel to Isabeau) is now available for $3.99 on Kindle and at Smashwords:

I'd also like to mention two authors' collectives that I belong to which specialize in Historical Fiction. You can find everything there from Ancient civilizations to 20th century war fiction, mysteries, westerns and historical fantasy. Check out their amazing selections to find more great new reads: