The Crown in the Heather is ... FREE! 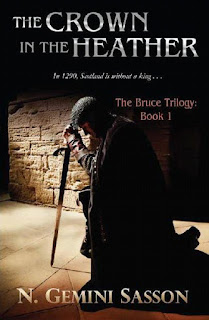 This is a quick public service announcement to let everyone know that The Crown in the Heather (The Bruce Trilogy: Book I) is now free as an e-book on Amazon.com, Amazon.co.uk, Barnes and Noble, Apple iTunes and Smashwords.

I'll report back later as to how having the first book in a series as perma-free affects sales of related books. So far it's going nicely. CITH got as high as #16 free overall in the Kindle store when E-Reader News Today picked it up. After just over a week, total downloads have exceeded 20,000.

So 'Hooray!' to new readers.

Meanwhile, I took a much needed month off from promotion, following my recent blog tour. I've also published five books in less than two years, so my brain (understandably) was getting a little scrambled. Since early June, I've read some phenomenally good books (which I'll list on a blog post shortly), cleared the brush out of the fence rows (I miss my sheep - they were good at that), weeded gardens, taken my dog to obedience class, gone on a lot of bike rides and am immersing myself in major revisions for an upcoming historical novel on Owain Glyndwr of Wales (more to come on that soon).

For those who would like to know some of what went on in Edward III's life in his waning years, I recommend Anne O'Brien's excellent historical novel: The King's Concubine: A Novel of Alice Perrers. For those not familiar with the events of the times, Alice Perrers was mistress to Edward III later in his life. O'Brien does a stupendous job of creating a sympathetic character out of Alice, who has been much maligned in history. I loved the narrative voice in this book and found it very compelling.

Here's wishing everyone a safe and fun summer!