One thing I love to do is share about books I've read that have left an impression on me. Ever since I got my first Kindle, almost two years ago, I've come across more wonderful stories than I could ever imagine. So here are just a few titles you can check out!

"This is the story of mankind clawing for survival, of mankind on the edge. The world outside has grown unkind, the view of it limited, talk of it forbidden. But there are always those who hope, who dream. These are the dangerous people, the residents who infect others with their optimism. Their punishment is simple. They are given the very thing they profess to want: They are allowed outside."

~~~ Still not sure? Grab the first installment for FREE!

Hugh Howey is just one recent self-publishing phenomenon. Here's a New Adult novel from another:

"Sometimes discovering the truth can leave you more hopeless than believing the lies...

That's what Sky realizes after she meets Dean Holder. A guy with a reputation that rivals her own and an uncanny ability to invoke feelings in her she's never had before. He terrifies her and captivates her all in the span of one encounter, and something about the way he makes her feel sparks buried memories from a past she wishes could just stay buried."

~~~ If you like Young Adult novels, but prefer something a little more . . . 'adult', this one has a lot of raw, gripping emotion. (*Contains some sex and violence. You have been warned. Still, great story and worth considering.)

"Kathleen Findlay is married to a cad, her mother is driving her crazy and her life is falling apart. Then her uncle dies, leaving her the family’s Revolutionary-era home and, she believes, an escape from her chaotic marriage. But one afternoon, while searching for a rake, she discovers a man in her garden shed — and a free fall through the centuries.

As her life spins wildly out of control, Kathleen finds her heart and in the process, her own place in time."

~~~ A sweet time-travel romance that has me eagerly awaiting the sequel.


#4 - When You Were Older, by Catherine Ryan Hyde

"Russell Ammiano works on the 104th floor of the World Trade Center. On the morning of September 11, 2001, the phone rings while Rusty is rushing to work. The news is devastating: Rusty's mother has died of a stroke, leaving his brain-damaged older brother Ben alone. This news also saves Rusty's life. He's still at home when two planes hit the World Trade Center--and only one of his friends and colleagues survives. In a single day, the life Rusty built in New York crumbles to the ground."

~~~ Loved, loved, LOVED this book. I never knew what was going to happen and there were several surprises along the way that kept me flipping the pages. There's a growing love story in this one, hindered by the misunderstanding of cultures post 9/11.

"Alaska, 1920: a brutal place to homestead, and especially tough for recent arrivals Jack and Mabel. Childless, they are drifting apart--he breaking under the weight of the work of the farm; she crumbling from loneliness and despair. In a moment of levity during the season's first snowfall, they build a child out of snow. The next morning the snow child is gone--but they glimpse a young, blonde-haired girl running through the trees."

~~~ At times bleak and filled with desperation, there is a glimmer of hope in this beautifully written tale. This is the kind of book that wins awards.

*****
~~~ Thanks to everyone who trailed along on my virtual blog tour for Uneasy Lies the Crown. I want to thank all my tour stop hosts and Goddess Fish Promotions for their work in making it happen. I'll be picking winners of the giveaway in the next few days and notifying them via e-mail. 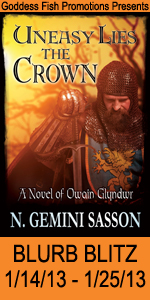 Join me January 14th through the 25th on a Virtual Blurb Blitz Tour for a chance to win an Amazon gift certificate! Simply stop in at any of the following blogs during the tour and leave a comment regarding Uneasy Lies the Crown, A Novel of Owain Glyndwr:

Until later,
Gemi
Posted by N. Gemini Sasson at 10:19 AM No comments:

Please welcome my good friend and one of my first crit partners (who taught me so much!), author Anita Seymour, who also writes as Anita Davison. On January 17th, Anita's new book, Royalist Rebel by Claymore Books, an imprint of Pen and Sword, will be released.


If you like historicals set during the English Civil War, here's some more information on Anita's novel for you:
~~~~~
"Intelligent, witty and beautiful, Elizabeth Murray wasn’t born noble; her family’s fortunes came from her Scottish father’s boyhood friendship with King Charles. As the heir to Ham House, their mansion on the Thames near Richmond, Elizabeth was always destined for greater things.

Royalist Rebel is the story of Elizabeth’s youth during the English Civil War, of a determined and passionate young woman dedicated to Ham House, the Royalist cause and the three men in her life; her father William Murray, son of a minister who rose to become King Charles’ friend and confidant, the rich baronet Lionel Tollemache, her husband of twenty years who adored her and John Maitland, Duke of Lauderdale, Charles II’s favourite.

With William Murray at King Charles’ exiled court in Oxford, the five Murray women have to cope alone. Crippled by fines for their Royalist sympathies, and besieged by the Surrey Sequestration Committee, Elizabeth must find a wealthy, non-political husband to save herself, her sisters, and their inheritance."
~~~~~

For a little background on the novel, see Anita’s Book Blog