If you still need to catch up on reading The Bruce Trilogy, Allison over at Musings of a Book Junkie is hosting a giveaway for one copy of a book from the series (The Crown in the Heather, Worth Dying For or The Honor Due a King), your choice of either Kindle or paperback (and yes, international entries are fine). Contest deadline is November 1st - so hurry over and add your name and contact info.!

Meanwhile, The Honor Due a King has stealthily found its way into the Top 100 for Historical Fiction on Kindle and I'm spending my days in 14th century England, working on the sequel to Isabeau. My desk is being overrun by research books, highlighters and Post-It notes.

Happy reading,
Gemi
Posted by N. Gemini Sasson at 10:24 AM No comments:

Email ThisBlogThis!Share to TwitterShare to FacebookShare to Pinterest
Labels: giveaway, Robert the Bruce, The Bruce Trilogy, The Honor Due a King

I'm guest blogging over at Sarah Woodbury's on razing castles in the 14th century. Follow me over there and check out Sarah's incredible blog, filled with historical articles! 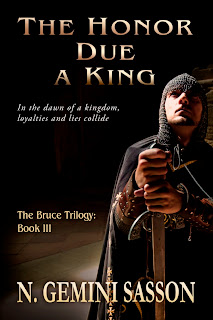 It's been a marathon week and as evidence to that, it's nearly noon and I'm still in yesterday's clothes. I just finished a backlog mountain of laundry at midnight last night and the grass has grown a foot since last mowing.

The end result is that the final installment in The Bruce Trilogy, The Honor Due a King, is now available as an e-book at Amazon.com, Amazon.co.uk, and Smashwords (for Nook, Ipad, Sony and Kobo). I'll post here again when it's directly available from Barnes and Noble, etc. The paperback should be available on Amazon well before the end of the month.

As I caught up this morning with e-mails from readers to let them know about the new release, I realized how the interest has snowballed over the past year and I got a little... misty. It's been a challenging year, both frustrating and rewarding in turns. But nothing worth doing is ever easy. So whatever your dreams and goals are - go for them! There are people out there who like to squash dreams by criticizing, dismissing or talking bad about you. Forget about them. As Oprah says: "Surround yourself with angels."

Now, here's the blurb for The Honor Due a King:

In the dawn of a kingdom, loyalties and lies collide.

The truth will change England and Scotland forever.

In the triumphant aftermath of Bannockburn, Robert the Bruce faces unfamiliar battles. His wife Elizabeth, held captive in England for eight long years, has finally returned home to Scotland. With his marriage in ruin and hopes for an heir quickly fading, Robert vows to fulfill an oath from long ago—one which will not only bind his daughter to a man she does not love, but challenge the honor of his most trusted knight, James Douglas.

While Ireland falls to the Scots, King Edward II of England must contend with quarrelsome barons. Hugh Despenser is the one man who can give him both the loyalty and love he so desperately craves. War with France looms and Edward’s only chance at peace rests with his queen, Isabella—a woman who has every reason to seek her own revenge.

Tormented by his past, James returns to a solitary, ruthless life of raiding into the north of England. When a bewitching spy promises him the ultimate victory, James must weigh whether to unveil the truth and risk losing her love—or guard his secrets and forever preserve Robert’s faith in him.