In Production: Audiobook for Uneasy Lies the Crown 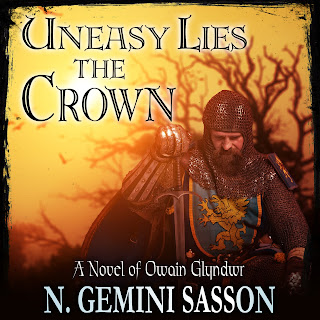 I may have been quiet lately, but that's only because I have important things brewing and have been holding off on sharing the news. First, a conversation with a representative at KDP (Kindle Digital Platform) led to an offer from ACX, Amazon's Audiobook Creation Exchange, wherein they offered to help fund the making of an audiobook for Uneasy Lies the Crown, A Novel of Owain Glyndwr. For a long time, I'd been thinking how much I'd love to do this, but had put it off for a number of reasons.

ACX's offer was just the push I needed. I've always written with the thought of a movie in mind - meaning when I write dialog or conjure up scenes, I want them to be dramatic in action and emotion and convey the breathtaking scenery in which the stories occur - things that would easily transfer to a screen. So far I'm still waiting on Hollywood, but this, IMO, is the next best thing.

A lot of writers cringe at hearing their books read aloud because it never quite sounds like they'd imagined, but the opposite has been true for me. One of the challenges about Uneasy Lies the Crown is that it contains characters who are Welsh, English, Scottish and French. No small task for any narrator. I spent a lot of time cruising around on ACX, listening to narrators who could potentially do a range of accents and when I got two auditions, I realized either would fit the bill. I tormented myself for a week, making friends and family listen to samples from the narrators. In the end, I went with my gut and contracted with the highly talented Kyle McCarley.

I've been absolutely blown away by Kyle's professionalism and the amount of work he's put into preparing for the reading. He's making every single voice distinct and I have to warn you, if you get a chance to hear him read Harry Hotspur's or Owain's parts, you may develop an 'audio-crush' like me. It's the same feeling I get whenever I hear an interview with Gerard Butler - I soak up every syllable. (Shhh! Do not tell my husband.)

I cannot wait to hear the finished product! Can you tell I'm a wee bit stoked? I'll post more about the process as things develop and will let you all know when it will be available. The audiobook cover above was created for me by designer Steven Novak, who also did the update for Isabeau's cover.