Uneasy Lies the Crown - Now in paperback! And a giveaway!!! 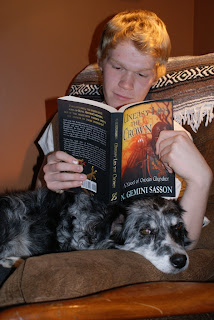 Uneasy Lies the Crown, A Novel of Owain Glyndwr is now available as a paperback from Amazon.com and Barnes and Noble. You can also grab it as an e-book from:

And from now until midnight Eastern time on Dec. 1st, I'm running a giveaway. For a chance to win a signed copy of a paperback of any of my books plus a $15 Amazon gift certificate OR just a $25 gift certificate, simply do the following:

1) Read Uneasy Lies the Crown and leave a review on Amazon.com or Amazon.co.uk. It needn't be a lengthy New York Times style book review, just your thoughts, plain and simple, stating your impression of the story and its characters.

2) Like my Facebook page if you haven't already and comment with the word 'Reviewed' in any of the appropriate posts about the giveaway - or leave me a message on Facebook. That's it! Reviews help not only authors, but guide other readers in deciding their next purchase.

(Giveaway open to customers of Amazon.com or Amazon.co.uk.)

I'm so incredibly appreciative of all the readers and book bloggers who've helped spread the word about my books and those who've written to let me know they enjoyed them and ask when the next one will be out. I wouldn't still be doing this without you. Telling stories is a dream come true.

Owain Glyndwr and the Welsh War of Independence 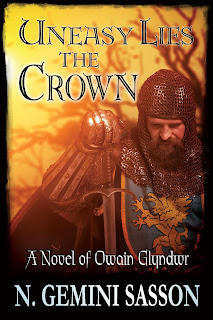 My latest release, Uneasy Lies the Crown, A Novel of Owain Glyndwr, is now available as an e-book for Kindle (Amazon.com and Amazon.co.uk), Nook (Barnes and Noble) and at Smashwords! The paperback should be available later this month, just in time for Christmas.

In celebration, today I'm over at Sarah Woodbury's blog with a post on Owain Glyndwr and the Welsh War of Independence. Sarah writes time travel set in 13th century Wales, so be sure to check out her books, too.

Owain's story was actually the first historical novel I completed, over a decade ago. When my first agent was unable to find it a home, I set it aside and went to work on The Bruce Trilogy. This year, I resurrected the story of Owain Glyndwr because, like the other people I've written about, his was a life I felt that deserved more attention. Some historians have speculated that Owain Glyndwr emulated Robert the Bruce and adopted not only many of his military tactics, but also his wider political visions. Still, there are subtle, yet profound differences between the two historical figures.

While I leave you to ponder that, here's the synopsis:

*****
For centuries, the bards have sung of King Arthur’s return,
but is this reluctant warrior prince the answer to those prophecies?

In the year 1399, Welsh nobleman Owain Glyndwr is living out a peaceful gentleman’s life in the Dee Valley of Wales with his wife Margaret and their eleven children. But when Henry of Bolingbroke, the Duke of Lancaster, usurps the throne of England from his cousin Richard II, that tranquility is forever shattered. What starts as a feud with a neighboring English lord over a strip of land evolves into something greater—a fight for the very independence of Wales.

Leading his crude army of Welshmen against armor-clad columns of English, Owain wins key victories over his enemies. After a harrowing encounter on the misty slopes of Cadair Idris, the English knight Harry Hotspur offers Owain a pact he cannot resist.

Peace, however, comes with a price. As tragedies mount, Owain questions whether he can find the strength within himself not only to challenge the most powerful monarch of his time, but to fulfill the prophecies and lead his people to freedom without destroying those around him.
*****