Giveaway ends February 01, 2016.
See the giveaway details at Goodreads.
Enter Giveaway
Want to win an autographed paperback of Lies and Letters, A Sam McNamee Mystery? Just click above to enter!

Until later,
Gemi
Posted by N. Gemini Sasson at 2:18 PM No comments:

Hi All,
Quick news before I rush off to tackle my never-ending to-do list. (A word of advice: Never remodel a kitchen and try to train for a marathon while writing a novel. The number of hours in a day are finite.)
Lies and Letters is out now. I LOVE doing this series because it allows me to create some really fun characters in a humorous way. More Sam and Bump adventures are planned for the future.
Meanwhile, I've begun the next Faderville Novel, Say Something. I'm not entirely sure how it's going to unfold yet, but there's a runaway teenager named Beam, an older guy making a trek across America named Buzz, and of course his Australian Shepherd, Hush, who happens to be a seizure alert dog.
Lastly, if you're a fan of my historical fiction, my story about the 15th century Welsh prince, Owain Glyndwr, is on sale on Kindle for a limited time. Info. about Lies and Letters and Uneasy Lies the Crown is below.﻿ 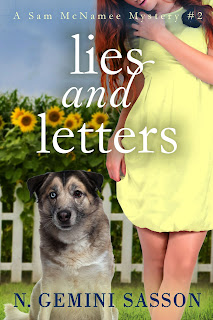 Lies and Letters (A Sam McNamee Mystery) is now available on Amazon for Kindle and in paperback.
﻿
There’s a drug lord corrupting the youth of sleepy Wilton, Indiana — and he’ll get rid of anyone who stands in his way, including an innocent witness. Even a drug-sniffing dog.

When Sam McNamee decided to chuck her dreams of living in the Florida Keys and instead settled in rural Indiana to raise her daughter and look after her aging father, she didn’t expect to be caught up in the middle of a drug ring investigation. But someone has it out for her. Or to be more precise, her dog, Bump. And they’ll stop at nothing to run her out of town — including framing her daughter.

All Sam wants is to give her relationship with veterinarian Clint Chastain a chance. But matters get complicated when Clint’s ex — sexy humanitarian Dr. Danielle Townsley — invades Sam’s territory. Clint keeps reassuring Sam that she’s the one he wants, but his actions leave room for doubt. Meanwhile, firefighter Archer Malone is the one constant in Sam’s roller coaster life. And he’s looking better all the time.

Then, Bump disappears — and the one person who could help her find him is the same one she’s trying to avoid. 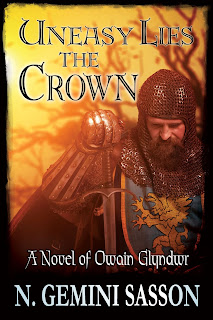 From now until January 8th, you can get Uneasy Lies the Crown, A Novel of Owain Glyndwr, ﻿for just 99 cents on Kindle. It also comes as an audiobook!
Posted by N. Gemini Sasson at 10:17 PM No comments: