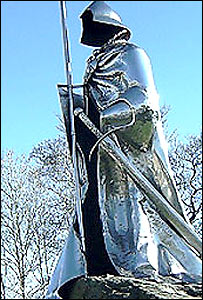 Llywelyn ap Iorweth accrued several Welsh territories during the first decade of the thirteenth century through both might and guile. For a while, he continued with the tradition of accepting an English overlord, but when he confidently declared himself as prince of all Wales in 1210, it was too much for King John of England to tolerate.  King John marched on Wales and had nearly unseated Llywelyn, when troubles with his own barons forced him to return home and sign the Magna Carta.  Llywelyn continued to accumulate Welsh territories, forcing the princes of Powys and Deheubarth to swear fealty to him.  Prince Llywelyn, who was later known as Llywelyn Fawr (the Great), was far-sighted enough to ensure that the complete inheritance of all his holdings to his son Dafydd was recognized early on, thus breaking with the tradition of gavelkind.  However, Llywelyn also had an older, illegitimate son named Gruffydd, and Welsh law recognized all heirs, whether born in or out of wedlock.

Knowing that his half-brother Gruffydd posed a threat to his rule, Dafydd had him imprisoned.  King Henry III of England marched on Wales and Dafydd was forced to hand Gruffydd over, putting Dafydd in a very compromising position.  He then publicly acknowledged Henry as his overlord.  When Gruffydd fell to his death in 1244 trying to escape from the Tower of London, Dafydd mustered his forces to oppose Henry.  But the uprising was over essentially before it began, as two years later Dafydd took ill and died without issue.  Gruffydd, however, had left four living sons behind.  Thus, another power struggle ensued.

Llywelyn ap Gruffydd was barely in his twenties when his uncle and father died.   Patiently, he built alliances and finally went to battle against two of his own brothers, defeating them and imprisoning the oldest.  Henry  III’s attempts to subdue Wales failed and inevitably he was forced to recognize Llywelyn as the Prince of Wales.

Meanwhile, Llywelyns’ troubles with his brothers continued and further complications arose when his betrothed, Eleanor de Montfort, was held captive by the new English king – Henry III’s son, Edward I.  Only after a forced submission and the relinquishment of much of his holdings was Llywelyn able to bring his bride-to-be to Wales.  A few years later she gave him a daughter, but sadly died in childbirth.

In 1282, on a bridge over the River Irfon, Prince Llywelyn (later known as ‘Llywelyn the Last’) was killed.  His head was delivered to London and set on display.  With this powerful Welsh prince removed, Edward I, also known as Longshanks, thought to end the Welsh rule of Wales once and forever by investing his son, later Edward II, as ‘Prince of Wales’.  For the next century, that coveted title passed down through the Plantagenet line of England to the future Richard II.  It is a title still employed today for future kings of England.