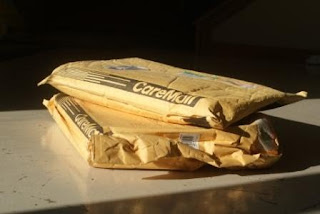 Last night I was searching under my bed for my fuzzy slippers (seeing as how it's practically winter already and my feet were freezing), when amidst the dust bunnies, de-gutted squeaky dog toys, and socks-without-partners, I re-discovered two long-forgotten trunk novels. One was my first ever attempt at a novel, which I'll very loosely describe as historical fantasy, and the other a slightly better attempt at real historical fiction, for which I actually did research, about 15th century Welsh prince Owain Glyndwr. And yes, those are the real trunk novels above which I certified mailed to myself, still sealed, just in case someone hacked my computer, stole my brilliant idea and hit it big - at which point I could sue them and make my millions that way.

What is a 'trunk novel'? As a writing mentor of mine once described, it's one of those feeble attempts at putting together a whole story, which we eventually come to realize isn't the best we can do. And so we nudge them aside (i.e. bury it in a trunk) and write something better. It's hard at the time to admit it and let go, but in retrospect a writer has to see the effort as a learning experience and not time wasted.

On another note, last night I was sprung with a deadline for submitting some blurbs about my stories and the latest revision of my manuscript about Queen Isabella. Isn't it amazing how a deadline can turn you from a brain-dead, thumb-twiddling zombie into a focused, productive individual? I was up until 3 a.m. and I'm operating on two cups of coffee already this morning, but it's done. Now, if you'd have given me a month to do it, I probably would have taken a month. Not that I ever procrastinate or anything...

Until later,
Gemi
Posted by N. Gemini Sasson at 9:49 AM