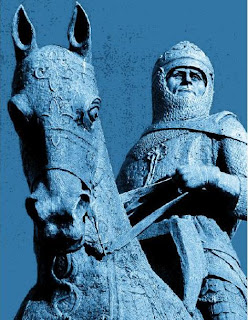 Last week I learned that not one, not two, but three - count 'em THREE - established mainstream historical fiction authors are coming out with novels that feature Robert the Bruce or William Wallace. I'm stoked! The last traditionally published author to venture into Bruce territory was Nigel Tranter with his own The Bruce Trilogy (released 1969-1971). (BTW, Tranter wrote a hundred books in his lifetime - wow! To be that prolific . . . )

Why would I be excited that someone else has written and is releasing a novel about the same historical figure? Because these authors already have loyal readers and their books are only going to increase awareness of the time period, the historical figures and the events surrounding the Scottish War for Independence in the early 14th century. This is such a rich period in history I'm surprised it's taken so long, but better late than never, I say.

Think about this: how many books are there about King Arthur, Queen Elizabeth I or Henry VIII (or any of his assorted wives)? Dozens . . . hundreds maybe? I say Bruce is the new Tudor. Move over Ann Boleyn, the Plantagenets are about to displace you.

Insurrection, by Robyn Young - From the author of The Brethren Triology about the Crusades, this one looks to have an interesting twist to it. (Hodder & Stoughton (UK), Oct. 14th, 2010)

The Forest Laird - William Wallace, by Jack Whyte - Whyte is the author of the Camulod Chronicles and various Templar books. (Tor, Sept. 2010)

There are loads of books out there mimicking Meyer's Twilight books and Rowling's Harry Potter series. Once hooked, readers go in search of more. Certain storylines or styles of writing will appeal more to particular readers. Books are not a one-size-fits-all category. So, for both readers and writers, competition is a good thing. And I'm looking forward to how each of those authors spins the tale of Robert the Bruce.

I believe this will benefit you, Gemi. Looking forward to the other books also.

With new interest in this period, I really feel CITH will hold its own beside all these books and become one of the recommended reads in no time!

The story of Robert the Bruce is so intriguing and endearing. It will only spark more interest in The Crown in the Heather. This is indeed great news.