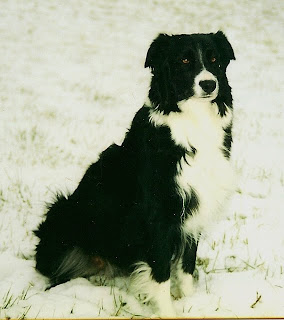 This post has nothing to do with books, writing or publishing. It is of a personal nature, but one which many of you reading this I'm sure will feel an undeniable connection with. And if there hasn't been some special dog who graced your life and enriched it, perhaps it was a cat or a horse or some other furred, feathered or scaled creature.

The alphabet soup after her fancy registered name basically means she was fast and loved to jump and climb on things - and that she had a few kids who took after her in that department.

Her name really should read: Domino - Loyal, Brave, Devoted and My Hero.

Almost 14 years ago I got a phone call. It was Domino's breeder. She asked me if I wanted her and told me if I didn't take her, she was going to have to 'blue juice' her. That's breeder-speak for 'euthanize'. We owned Domino's sire, Drum, who back in the day was a multiple Best of Breed winner in the showring and an all-around versatile dog. Nervously, I asked why - because when someone says they're going to put a dog to sleep, you figure it's got to be for serious reasons. "She's dog aggressive. She beat the crap out of her litter sister, and blah, blah, blah..."

My first thought was of my two young children. Did I really want to bring a dog in the house that had aggressive tendencies? I should've said 'no', but I have this inexplicable sense of intuition and on that occasion, I blurted out, "Yes, when can I get her?"

You see, one thing I've learned in over 20 years of being a dog breeder, is that sometimes what an owner tells you about a dog and what is really true about that dog are not necessarily one and the same. The breeder had decided to keep two females and a male from the litter because she couldn't make up her mind who to pick. We had warned her this was a bad idea. Littermates will always establish a pecking order. Sometimes this shakes out quietly; sometimes the fur flies. Especially when said pack is unsupervised by humans. Which was the case in this instance.

When Domino came to our home, she growled once at my husband, was promptly picked up by the ruff and given a stern talking-to, then she went limp as a dishrag. She was smart enough to know she wasn't boss here.

Gradually, I began to trust her. She never once provoked another dog - either her kennel buddies or strange dogs in public. Not only was she not dog aggressive, but she was an absolute mush when it came to children. She cleaned up the crackers they dropped on the floor, yet never stole from their hands or off their plates. She went to nursery school, where I spoke to 4-year olds about how to behave around dogs and fourteen of them took turns dragging her up and down the hallway on leash, tugging her hair and crushing her in bear hugs. She alerted us when strangers came to the house and made a fierce racket to warn them they were on her territory, yet the moment she sensed we accepted them, she let her guard down and begged their attention with dark, intelligent eyes.

At some point I noticed she had a penchant for jumping UP on things. Crates, trashcans, tables and even cars. So I took her to agility class and that is where she found her joy in life. Running agility with her was a bit like driving a Porsche on the Autobahn. That smooth, that effortless, that fast and free. I could actually run the course without saying a word to her. All I had to do was point at an obstacle, turn my shoulders or slow down and she responded.

What I will remember of her is not her titles or her children's titles. It is that in return for me saving her life, she also saved mine.

I rarely speak of this. It's not a day I like to remember, but on this occasion I will. We'd had another dog who, to put it kindly, had a few loose screws. He could be friendly and smart one moment, and reactive and sharp the next. He hated another of our dogs, Pirate. Loathed him. Pirate could've cared less, but Pirate was also not going to let another dog beat up on him. One day, this dog slipped past me into the yard with Pirate. I tried to call Pirate in, but he was afraid to turn his back. When I went into the yard, the fight had already started. And it was an ugly, nasty, to-the-bitter-end kind of fight. I stupidly grabbed the other dog by the scruff, intending to hoist him in the air and literally throw him over the fence. But he whipped around, clamped his jaws down on my arm and would not let go. In his rage, he no longer knew me.

I screamed. It was the worst pain imaginable. Panic consumed me. And then . . . he let go. Domino had sunk her teeth into his neck. I stood up and, my arm dripping with blood from a big gash that exposed tendons, ran inside. My heart in my ears, all I could hear behind me was the gnashing of teeth and throaty growls.

While I rinsed my arm off under the faucet and had my kids call my husband home, Domino had beaten the other dog to the ground and tore a hole in his side the size of a grapefruit. He slunk off into a corner while she kept a watchful eye on him. In the fight, she had broken two teeth and torn an ear, as well as suffered deep puncture wounds.

When I returned home from being stitched up at the hospital, my husband let Domino into the room with me. For several days, she wouldn't let another dog near me, even when I told her it was okay. When we both recovered enough to get back to agility, our bond, our means of communication were stronger than ever. It was like she could read my mind. In a sense, I could read hers, too. Her eyes said what she could not.

Domino is nearly sixteen now, but she hasn't long left. A few weeks ago I noticed a mammary tumor. It grew rapidly. She hasn't eaten for three days. Her breathing is shallow and rapid. What little she drinks comes right back up.

She's in the laundry room within eyeshot of my desk. I check in with her often and run my hand over her fur and tell her what a good, brave dog she is. I compliment her on her speed and jumping ability. Tell her she was a wonderful mother to her pups. I reminisce with her about the good ol' days in agility and all our trips together, getting up before dawn and driving for hours. When I do, I recall her grace and her intelligence, her impeccable manners and her love of children.

Sometimes, I run my fingers over that scar on my arm and think how I have been blessed to know true devotion, have witnessed courage firsthand and just realize how incredibly lucky I have been to have her in my life.

Until later,
Gemi
Posted by N. Gemini Sasson at 3:18 PM

Email ThisBlogThis!Share to TwitterShare to FacebookShare to Pinterest
Labels: dogs

I'm sorry Gemi...no matter how long they bless us with their presence it is never long enough.

Thanks. She's hanging in there. Just very tired.

Anyone who hasn't read A Dog's Purpose yet by Bruce Cameron, I highly recommend it. Helps you understand what dogs must feel towards their humans.

i went out and hugged mine, weeping of course immediately after reading this, gemi. they are such amazing creatures and loyal friends. my heart breaks for you, that you're nearing the end of your journey with her but she'll always remain with you, your fearless and faithful savior. thank you for a beautiful tribute to an amazing friend.

I'm so sorry. She was a wonderful dog - I'll never forget the day I met her. Two of her wonderful pups truly changed my life.

Oh Gemi, this is the second time I have cried while writing you an email. First was when I lost Sydney, your Kirby's girl. Now I have Domino's girl, Pepper, and I could not love her more. Domino was incredible and mothered the most amazing pups; she will be remembered and loved forever through them. She will never be forgotten. You are in my thoughts and prayers.

Oh, my dear lady. I weep for you, and at the same time, my heart rejoices that you knew the depths of her love, and she knew yours for her.

Blessed may she be and easy her passing. Blessed may you be in all your precious memories of her. Love to you. I go now to hug my furry "children."

I truly appreciate the support, everyone. We lost her this past Saturday. In spring, we'll plant a tree where she's buried (I went looking yesterday and it's too late in the year to buy one). Amazing how one animal can sometimes impact our lives more than most humans.

so sorry, gemi. big hug for you.

Thank you for sharing your companion's life with us. I have three dogs, two border collies (female) and an eight month old Huntaway (male), and I have never lived without a dog. While my dogs are 'working' breeds, they are our family companions, but we live rurally so they have huge area to gallavant & play. My canine companions are of huge comfort to me - they offer me company, and communicate in such a perceptive way. Six years ago I was nursing an aged canine friend, a rottweiler/german shepherdX who had a similar "reputation" as a young dog as your dear friend, so I rescued him from the city & he moved with us to the country where he spent the next 12 years living rural & those were wonderful doggy years of having the space to play & run.I felt so safe with him, & trusted his judgment of character implicitly. The time came for me to be brave & strong for him in return for the loyalty, companionship, & protection he gave me & my family. I see a lot of him in my young Huntaway, & still talk to him when I take the other dogs down past where he is buried. Never mind the eiffel tower, pyramids etc, I believe the canine is top of my list of "wonders" of the world, & we humans have been blessed with their company.

Aww, Gemi. What a great story. Thank you for sharing it. Me also in tears.