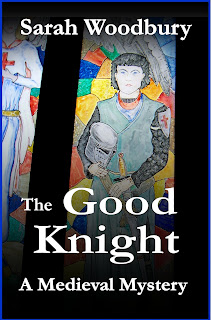 Today, I'm happy to announce a guest post by fellow historical novelist, Sarah Woodbury. I asked Sarah to tell us why she writes about medieval Wales and how the political intrigue there features in her books, including her latest release, a medieval mystery entitled The Good Knight.

"Wales in the middle ages has been a focus of my research and passion as an anthropologist, writer, and amateur historian for the last ten years. One of the joys of working within this era is the extent to which history is stranger than fiction. Medieval Wales provides a wealth of opportunity for story-telling, with all the drama and excitement a novelist could want—without even having to make it all up.

The Good Knight is set against the backdrop of the rule of Owain Gwynedd, one of the most powerful and stable monarchs of north Wales in the middle ages. He was fortunate to have ruled during a time in which England, which had been trying to conquer Wales for a hundred and fifty years, was torn apart by the rivalry of two claimants to the throne: King Stephen and Empress Maud. Owain, in the fine tradition of Welsh royalty, took advantage of the strife in England to consolidate his rule and bring the other Welsh dynasties under his control.

In doing so, however, he engendered animosity among the other lords of Wales—and within his own family. With two wives, multiple mistresses, and a dozen sons, many of whom fought among themselves for power and favor, he created a legacy that would last until the death of Llywelyn ap Gruffydd at the hands of the English in 1282.

And made him a fulcrum of murder and mayhem in the middle ages."

The Good Knight (A Medieval Mystery)

Intrigue, suspicion, and rivalry among the royal princes casts a shadow on the court of Owain, king of north Wales…


The year is 1143 and King Owain seeks to unite his daughter in marriage with an allied king. But when the groom is murdered on the way to his wedding, the bride’s brother tasks his two best detectives—Gareth, a knight, and Gwen, the daughter of the court bard—with bringing the killer to justice.


And once blame for the murder falls on Gareth himself, Gwen must continue her search for the truth alone, finding unlikely allies in foreign lands, and ultimately uncovering a conspiracy that will shake the political foundations of Wales.


The Good Knight is available now at Amazon, Amazon UK and at
Smashwords.

Happy reading,
Gemi
Posted by N. Gemini Sasson at 10:10 AM

Thanks for having me over!

My pleasure, Sarah! I think Wales is one of the best kept secrets around. The history is so rich and I advise anyone who has the chance to go there - it's gorgeous!

I have read 3 of Sarah's books (The time series ones). I think I will have to check out this new book. Thanks for the heads up.

It's a real page-turner towards the end, Chris. I'm enamored of a certain Irish Dane. I'll let you figure out who when you get to it.