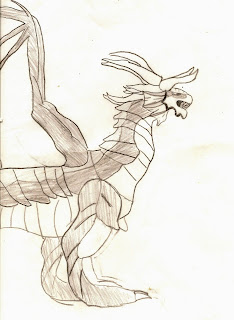 I have shamelessly stolen my son's artwork (from when he was about 14) for this blog post. I hope he won't mind, but I'll find out soon enough. When he was a Buddha-bellied tyke with a bowl haircut, he had a fascination with dinosaurs and dragons. So when we moved into our rat-infested, cob-webby house, which we had blindly bought at a sheriff's auction, I figured after emptying and gutting the place I'd decorate my kids' rooms in a way that was uniquely them. My daughter got a mural with blue sky and green rolling hills dotted with sheep and horses. In my son's room, I stenciled a chair rail border of 2" high green, fire-belching dragons.

Those tiny dragons were there for ten years. Until this past spring, when we discovered he had allergies. So we ripped out the carpet, put in new wood floors and I woefully painted over those dragons - all 68 of them. There was something very symbolic about the process. A rite of passage not only for my now 18-year old son, but for me, as well.

After we packed him off to college, friends would ask, "Don't you feel like an empty-nester? Miss your kids?" Well, yes... and no. He was so stoked about going, how could I possibly have regrets about it? People used to ask me something similar when we raised puppies and they went off to their new homes. "Aren't you sad to see them go?" Um, do you know how many piles of poop 10 8-week old puppies make on a daily basis? Okay, kids can be messy, but not in that way.

The point is, I know if I've planned my litter, socialized it and done my best to hold out for good homes, things are going to turn out just dandy. I'll get reports for years from beaming owners about the fabulous things their dogs have done. If I've raised my kids right and given them the good sense to be able to go out into the world and make their own way, it's actually kind of exciting to nudge them from the nest, see them take wing and know that in time they're going to be okay. They might even do good things and make me proud.

It's like that with writing books. I labor over them for years. Eventually though, I have to let them go. I'm about at that stage with another one. I alternate between feelings of apprehension and excitement. What if someone hates it? What if someone loves it so much they want to make a movie out of it? Part of me wants very fiercely to keep it to myself and stay safely connected to the characters so I can go on living in their world. But a bigger part of me knows there comes a time when I need to trust in the universe and share it with readers.

The difference between kids and books is that there's always another book to write. I've run out of kids. And I have so many more books to write...

Until later,
Gemi
Posted by N. Gemini Sasson at 6:56 PM