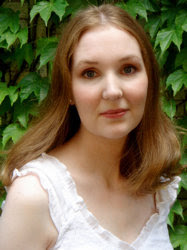 This week's featured historical fiction e-author on MDAMM is Anna Elliott. The author of Georgiana Darcy's Diary, as well as the Twilight of Avalon trilogy, published by Simon & Schuster (Touchstone), she lives in the Washington DC Metro area with her husband and two daughters.

Anna has generously offered to giveaway 2 free Kindle copies of her newest novel, Georgiana Darcy's Diary! To enter to win, simply leave a comment below. Entries close at midnight, U.S. Eastern time, on Thursday, May 19th. The winners will be announced Friday.

"Fans of Jane Austen will relish this captivating story. I loved the echoes of Austen's wit, the well-crafted drawing-room intrigues, and the engaging romance. Elliott's heroine is unique and believable, but totally true to Austen's original character. A delightful read!" -- Jules Watson, Author of The Raven Queen 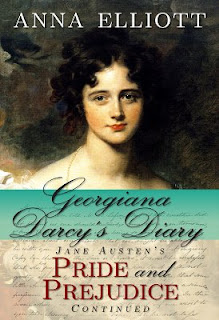 I asked Anna to tell us more about why she writes and what inspired her to continue the story that Jane Austen began.

"I've read Pride and Prejudice many, many times, and seen the various movie adaptations more times than I can even begin to count. (Colin Firth is my favorite Mr. Darcy!). I love Elizabeth and Darcy's love story, of course--it's a testament to Jane Austen's genius that it truly stands the test of time. Watching Mr. Darcy and Elizabeth fall in love, seeing the two of them overcome their initial first impressions of one another is as compelling now as it did 200 years ago. Maybe because that kind of love story truly is timeless. Isn't that the eternal magic of romance, that we're able to discover new facets of those we love--and that love has the power to transform us and our lives.

I could read Pride and Prejudice again and again, and be caught up in Elizabeth and Darcy's story every time. And yet, strangely, it's always been Georgiana Darcy, Mr. Darcy's younger sister's character, that stays with me the longest, each time I read the book or watch one of the films.

Georgiana's character is almost a plot device in the book--proof of Wickham's villainy, since he tried to seduce her when she was only fifteen. She's described as 'exceedingly shy' and we never actually hear her speak a single line; any dialogue she has is summarized by the narrator. And yet I've always wanted to know more about her--how did she really feel about George Wickham? What was it like growing up as Mr. Darcy's younger sister? And most important of all, I couldn't stop myself from imagining what might have happened to her after the close of Pride and Prejudice. Did she ever find her own happily-ever-after?

Georgiana Darcy's Diary was born out of all my wondering. I chose a diary format to tell Georgiana's story, first because I'd never written a diary form novel before, and wanted to challenge myself to master the form. But mostly that was just how I heard Georgiana's voice in my head: a shy girl, pouring herself onto the pages of the private journal that---at the beginning of the story, at least-- serves as her only real confidant.

Mr. Darcy's younger sister searches for her own happily-ever-after...

The year is 1814, and it's springtime at Pemberley. Elizabeth and Mr. Darcy have married. But now a new romance is in the air, along with high fashion, elegant manners, scandal, deception, and the wonderful hope of a true and lasting love.

Shy Georgiana Darcy has been content to remain unmarried, living with her brother and his new bride. But Elizabeth and Darcy's fairy-tale love reminds Georgiana daily that she has found no true love of her own. And perhaps never will, for she is convinced the one man she secretly cares for will never love her in return. Georgiana's domineering aunt, Lady Catherine de Bourgh, has determined that Georgiana shall marry, and has a list of eligible bachelors in mind. But which of the suitors are sincere, and which are merely interested in Georgiana's fortune? Georgiana must learn to trust her heart--and rely on her courage, for she also faces the return of the man who could ruin her reputation and spoil a happy ending, just when it finally lies within her grasp.

In addition to Georgiana Darcy's Diary, Anna Elliott is the author of a trilogy of Trystan and Isolde, published by Touchstone: Twilight of Avalon, Dark Moon of Avalon and Sunrise of Avalon (coming in 2011), as well as two shorts stories available as e-books: Dawn of Avalon (currently FREE) and The Witch Queen's Secret (only 99 cents).

For more information on where to find Anna's books, check her website, her Amazon.com author page or her Smashwords author page.

Many, many thanks to Anna Elliott! Next week I'll feature Shayne Parkinson, author of historical sagas set in 19th century New Zealand.

Count me in, please!

I love Georgiana and I feel she needed her own story. Glad she is getting one

Thanks so much for having me, Gemini!

I just finished the excerpt, so really want to finish her story.

I'm not sure if my other comment was accepted, but I would be happy to win the Kindle version.

Thanks to everyone who's entered so far! The winners will be announced Friday morning.

I understand Blogger's been having some hiccups this past week in regards to comments. If anyone has trouble posting here, just send me an e-mail to imgnr "at " imgnr "dot" com and I will enter you.

I tried entering on Monday, but I guess it did not work. I would love to win this book...P&P is one of my favorite books.

Hi Chris - So sorry about that, but glad you tried again. I wasn't aware of the glitch until someone mentioned it on Twitter a day or two ago. I do hope they have everything fixed now.